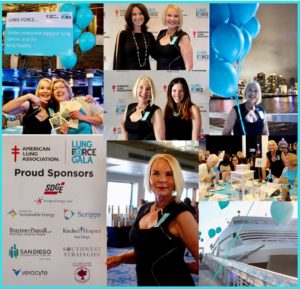 Established in 1904, the American Lung Association is one of oldest and among the most venerable non-profit institutions in America.

They began their efforts in 1904 by successfully battling tuberculosis. Later, they discovered the gene which causes cystic fibrosis.

The American Lung Association is responsible for leading the charge to drive down smoking rates and for advocacy efforts which resulted in smoke-free laws.

According to the National Institutes of Health, “People with lung disease have difficulty breathing … millions of people in the U.S. have lung disease.”

As the American Lung Association continues its important work of ensuring clean air to breathe and healthy lungs with which to enjoy it, they also embrace advocacy and research for lung cancer.

Lung cancer represents approximately 14 percent of all cancer diagnoses in the U.S. Every 2.5 minutes someone is diagnosed with lung cancer. Over 220,000 people receive a lung cancer diagnosis each year, making it the leading cause of cancer and cancer-related deaths in America.