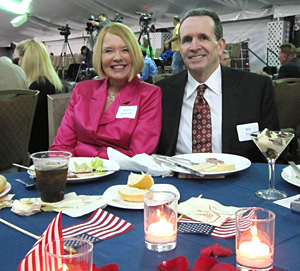 At Your Home Familycare President and Founder Laurie Edwards-Tate attended a fundraiser on October 9 for the nonprofit organization Combat Veterans for Congress (CVFC).

CVFC and its fundraiser supports Congressional candidates from California and other states who have all served our nation in the military who now aspire to serve the United States politically. The evening’s keynote speaker was former Alaska Governor and Republican Vice Presidential candidate Sarah Palin. A large number of veterans across many eras including several disabled veterans were also present and received great support. Edwards-Tate says, “I felt truly honored and grateful to be both present and a contributor to the nonprofit CVFC.