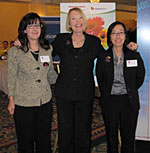 Laurie Edwards-Tate, President & Founder of At Your Home Familycare, was among the women nominated for this recognition. 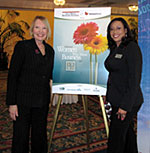 Edwards-Tate said, “It was an honor to be among such a special group of 137 nominees. Though the event was fun and inspiring, it was saddened by the loss and tragic death of veteran San Diego Police Officer Christopher Wilson killed in the line of duty earlier that morning. A tribute and moment of silence were made in his honor.”